This material is based on Patrick Green’s presentation at the 1/25/22 LArSoft Coordination Meeting, LArTPC simulation and data-processing with Theta.

Thanks to the work of Patrick Green (University of Manchester), Misha Salim (Argonne Leadership Computing Facility)  and Corey Adams (Argonne Leadership Computing Facility) there has been a demonstration of efficient running of unmodified LArSoft at large scale on the Theta supercomputer (~260,000+ cores) in late 2021, using an end-to-end production workflow for an SBND test sample. This is the  first full scale production with LArSoft on an HPC.

Theta is useful for large, computationally demanding samples, such as simulating and reconstructing a very high-statistics cosmic sample.  Although challenges remain in handling output files on Theta, and sample transfer from ANL to FNAL is a bottleneck, producing this type of sample on the grid would be extremely time consuming. Documentation for running SBND production on Theta is available at: https://sbnsoftware.github.io/sbndcode_wiki/SBND_at_Theta

Background on Theta and LArSoft

The Theta supercomputer at the Argonne Leadership Computing Facility (ALCF) has 4392 nodes, with 64 cores per node, so can run  281,088 jobs simultaneously. LArTPC simulation and data processing is suited to run on an architecture like Theta since it is event based with large scale processing that is easily made parallel.

The sample was split into single, or a small number, of event jobs. A separate core processed each job with the output merged into files of N events. Balsam managed large scale production by automating the splitting, running and merging of events.

Globus transferred data between Theta and Fermilab at speeds up to ~1.2 GB/s. This may be able to be increased and there is potential to automate file transfer using Balsam.

To transfer files to tape, POMs metadata extractor scripts were modified to work with Theta generated files.  From there, the standard FTS plugin / dropbox system automated extraction of metadata, declaration to SAM and transfer to tape-backed storage. Theta produced samples could then be treated identically to standard production samples by analyzers.

Once a functioning workflow was obtained, the task was to get it running efficiently at a large scale. A typical large scale application in LArSoft would internally use many cores/nodes with a separate instance of LArSoft running on each individual core. Initially, this led to major bottlenecks / overhead costs, which were evident in a drop of CPU efficiency from ~95% at ~250 cores, to ~30% at ~8000 cores. 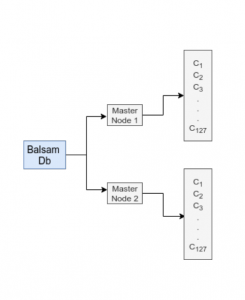 The two main bottlenecks resulted from the need to run separate instances of LArSoft on each core:

After these changes, scaling was again tested with reproducible reconstruction of simulated Corsika cosmics in SBND (reco1 & reco2).  In 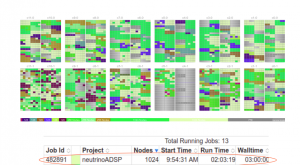 this test, efficient throughput was achieved at large scale:

A similar job on the grid would take days.

While it is possible to run LArSoft without modification, as was done in this demonstration, enabling the use of AVX-512 vector processing would improve performance.

There is a wiki page on GitHub that  documents how to run production on Theta at ALCF. Although written for SBND, the documentation was designed to be easily adaptable for any experiment code running LArSoft. It is available at: